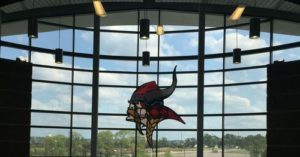 In September of 2016, we were proud to help complete a four-phase project at Princeton Schools. The project was broken down into four phases to allow for new buildings and athletic fields to be created.

In 2015, phase three called “Viking Village” was completed. Viking Village is 200,000 square foot facility that contains a 2,500 seat basketball gym, 1,000-seat auditorium, a swimming pool with a 300-seat natatorium, as well as a locker room, weight room, and wrestling area.

In the final phase of the project, 10 outdoor tennis courts, track, soccer, football and 2 baseball fields were completed.