The School for Creative and Performing Arts, a college preparatory school which focuses on the Fine Arts, is part of the Cincinnati Public School District. It was originally opened in 1973, and was housed in  4 different schools, including the old Woodward High School building. By 2010, it was time for a new and improved school to be built. The Over-the-Rhine area of Cincinnati was undergoing revitalization , and SCPA was at the forefront of these plans. At 7.5 million dollars and over 1000 tons of steel, This was one of our largest projects to date 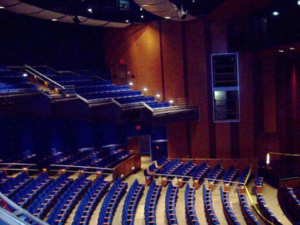 Our 1-year project consisted mainly of structural steel, as well as stairs and railings. The building contains 3 new theatres. The main theater (pictured above) seats 750. There is also a 350-seat Mayerson Theater and a 120-seat black box theater.

The most intricate part of the theater was the roof. Its height, combined with the integrated catwalks and stage equipment, made for a tight, complex workspace.   The monumental staircase,  was welded in the form of a tube, also proved to be an exciting challenge for the team.